A few years ago, cancer became a part of our reality when Kiku Collins was diagnosed, a few weeks after our marriage. The cancer was like an unseen villain lurking in the shadows and ready to cause trouble at any time. But, conversely, the treatment for the cancer caused visible pain and anguish for Kiku and our family, daily.

It was during her treatment that I learned a valuable lesson. As I would prepare to go to the gig for the evening, I would help her to empty drains from the surgery. Our conversations would be expressions of our shared fears and worries that would have to find their resolution over months and years. And, amidst this dissonance, I had to go to work. Many of those nights, I was charged with being the musical director. This meant that others would be looking to me as a point of reference.

I didn’t handle this well, at first. Up to this point, I’d never handled it well. I would arrive to work and still be distracted by events at home. This distraction was, no doubt, reflected in my performance. But, over time, I began to realize how I was hurting everyone by doing this, including me. So, I started having talks with myself on the walk to the subway. I’d practice breathing and articulation and imagining what a successful evening on the bandstand would look like. I would imagine what it looked like when I gave others the energy required for all to feel comfortable. I would imagine being happy.

By the time I reached the venue, I was in tune with my responsibilities and was committed to meeting them. The band would, inevitably, play great and everyone would be enjoying themselves, including me. It was energizing. When I would return home from the gig, all of the fears and worries would be waiting for me. But, I was energized. I could deal with them. I had recharged my own emotional battery by keeping my mind in the music rather than on my problems.

I still continue this practice, with varying results. But, I won’t fail because I didn’t try. I hear there’s a phrase used in the business world that goes, “Check your emotional elevator and determine what floor you’re on and what floor you NEED to be on, when you get to work.” That resonates with me. Besides, I love music. It would be a waste to be on the bandstand with world-class musicians playing world-class music and choose to have my mind on negative things elsewhere. I have followed this path in pursuit of music. My problems will still be waiting for me, after the gig. And, I’ll have the energy to confront them. 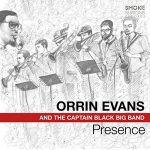 The Captain Black Big Band- the making of “Presence”